Teams for the annual Auckland versus Waikato to be held in Hamilton on 13th August.

After a lengthy selection process, the selectors have announced the Target Shooting Auckland team for this year’s event.

The final seeding will be sorted closer to the event. Congratulations to those selected and may the marking be on your side.

The final night of Interclub for 2016 was held last night on the Howick range. It was great to see the best number of shooters turn out since 2011.

Individually, Steve P was the outstanding winner in Master Grade with a score of 999.76 out of 1000. A remarkable result. In A Grade, one point separated the top three shooters with Rob D on top. In B Grade, 4 points separated the top three shooters with John D winning by two points. C Grade was won by Marc D while D Grade was also tightly contested with Mark R winning.  Congratulations to all our season winners. The results are here.

The Waitakere Open was held on Saturday 3rd.  Results are here.

Last night was our penultimate round of the Interclub matches. Howick won Division One by only 3 points, aided by Steve P shooting another 300 for the night. Division Two was won by Waitakere A with Waitakere B picking up second place from Howick A. Only one point separated 2nd, 3th and 4th. The individual scores are hotting up with one match to go, especially in B Grade, remembering that just the top five scores count for the season total. Check out the results.

Last weekend was the annual Auckland versus Waikato match that was held in Hamilton.  Unfortunately, we struggled to fill our teams this year and were soundly beaten in all matches by Waikato. Check out the results here.

Our secretary has put together the latest Newsletter – if you haven’t seen it, a copy is posted here. It contains a number of teams so please check to see if you are in any of the Auckland teams.

This week also sees Round 6 of our Interclub series hosted by Waitakere. This will be combined with some of the Rep matches, so please check what matches you are shooting.

Next weekend is the annual Auckland versus Waikato match. It will be held in the Dey St Range, Hamilton. Our team selections are here. Good success for all our shooters.

It was the fifth round of the Auckland Interclub competition last night hosted by Auckland SRC. The shoot was notable on several levels.

First was that Auckland managed to field a full team of its own shooters this year – welcome back to shooting Jonathan G who performed well despite a long absence from the sport.

Second was Steve P’s remarkable form with another 300.24, which included a 100.10. Unfortunately, Steve was an inner down from last years same match !!!

Thirdly, Howick A cleaned up in Division One while Waitakere A just held off Waitakere C (2nd) and Howick A (3rd).  All the results are here.

The Auckland versus Waikato match is looming large – it is on August 13th. If you have been selected, please made sure you have confirmed your acceptance.

Finally, it is on a sad note that we note the loss of a great Auckland and NZ shooter, Bob Caie, who died on the 18th July 2016. He was the backbone of the Auckland Open team for many years and will be missed by all his team mates and follow shooters.

Last night was the fourth round of Interclub at Howick.  Howick’s home advantage ensured an easy win for them in Division One. In Division Two, despite having three teams shooting on the night, Waitakere A had a strong win over Howick A and Howick B. Results are here.

Congratulations to all the shooters participating in the 2016 Open Championship. Check out the results here.

Master Grade, 20-shot and Open was won by Steve P with his usual brilliant shooting which included a 100.10 !!!

C Grade was won by Samantha R from Tauranga with 286.12

Another night and another Interclub at Waitakere is done for the month. Waitakere managed to beat Howick in Division One. Howick really needs to find another shooter !!

Waitakere C, a team of all D Graders managed to win Division Two beating Waitakere’s A and B teams. The new handicaps are making for very close team results this year.

Steve P managed another 300.21 and was ten points better than the next shooter. Both Graham B and Chris W also showed a good return to form.

Our hard working secretary has recently published our TSA NEWSLETTER #3_2016 in case you missed it.

Also the Auckland Open is on Saturday 25th June, so helpers and shooters please mark it in your diary. Check here for details – Akld_Open_2016_flyer

Well Teams of Tens for 2016 is now done and dusted with Manawatu No. 1 triumphing for another year. Auckland only just stayed up in Division One, but it was a close call.

The Summary results for all teams are shown below, while the full results are available on our Results page. 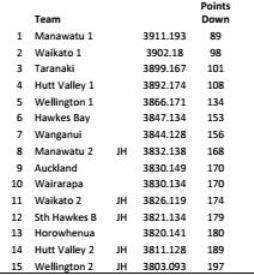 The second Interclub was held at Howick last Monday. Results are here. It was an average turnout with a number of shooters unable to attend on the night. Howick triumphed in Division One while the Waitakere B team come out on top in Division Two.

On the Individual front, the competition is warming up and will be watched keenly over the next few Interclubs.

Teams of Ten will be at Lower Hutt on the 14th. Good wishes to everyone competing and safe journeys.

The latest newsletter, has just been received. Key news is that the latest TSA team for the Teams of Ten in Lower Hutt has been released. Team details here. Congratulations to all selected.

Target Shooting Auckland would like to congratulate Ryan Taylor for being selected for the Rio Olympic Games – we look forward to a great performance.

The annual Tens of Ten shoot is on in May 14th in Lower Hutt this year.

Please register your interest in being considered for the team – new shooters are very welcome and it is a great shoot.

The first Interclub of the new season was shot at the Auckland SRC. The rules for 2016 have been updated to allow the lower grade shooters to be more competitive and the provide closer matches. This saw five teams in Division Two despite Howick being light on numbers to start.

In Division One, Waitakere had a walk-over, while in Division Two, Waitakere A won with a handicap score of 598.19 closely followed by Waitakere B with 595.17 and Howick A third with 586.20.

It was good to see Lawrence returning to his best with a pair of 99.4’s.

Check out the Results page for all the details.

Welcome to the new indoor shooting which officially starts on April 1st.

Most shooters will be trying to get in some good practice before the grading begins.

All clubs are now back in business and old and new shooters are very welcome, as usual !!!

My tips to focus on for the year include:

Welcome to the new Committee – we have some fresh faces and they are keen to make sure shooting thrives as a sport.

The annual General programme for the year have been posted, along with the first newsletter of the year. Check them out.

Teams of Ten will be in mid May, so please nominate and getting training.

The 2016 season interclub has some new changes to the rules to make it MORE shooter friendly. Let’s all start with a BANG this year and join in.